TOM WAITS
"The One That Got Away"

Well this gigolo's jumping salty, ain't no trade out on the streets,
Half past the unlucky, and the hawk's a front-row seat
Dressed in full orchestration, stage-door Johnny's got to pay,
And sent him home talking 'bout the one that got away

Could have been on Easy Street, could have been a wheel,
With irons in the fire and all them business deals
But the last of the big-time losers shouted before he drove away,
"I'll be right back, as soon as I crack the one that got away"

Well, the ambulance drivers, they don't give a shit,
They just want to get off work, and
The short stop and the victim are already gone berserk
And the shroud-tailor measures him for a deep-six holiday,
The stiff is froze, the case is closed on the one that got away

Now Jim Crow's directing traffic with them cemetery blues,
With them peculiar-looking trousers, them old Italian shoes
And a wooden kimono that was all ready to drop in San Francisco Bay
But he's mumbling something all about the one that got away

And Costello was the champion at the St. Moritz Hotel,
And the best this side of Fairfax, reliable sources tell
But his reputation is at large, and he's at Ben Frank's every day,
Waiting for the one that got away

He got a snakeskin sportshirt, and he looks like Vincent Price,
With a little piece of chicken, and he's carving off a slice
Someone tipped her off, and she'll be doing a Houdini now any day
She shook his hustle, and a Greyhound bus'll take the one that got away

Well, Andre's at the piano behind the Ivar in the sewers,
With a buck a shot for pop tunes, and a fin for guided tours
He could-a been in "Casa Blanca", he stood in line out there all day
Now he's spilling whiskey and learning songs about a one that got away

Well I've lost my equilibrium and my car keys and my pride,
The tattoo parlor's warm, and so I hustle there inside
And the grinding off the buzz-saw, "What you want that thing to say?"
I says, "Just don't misspell her name, buddy, she's the one that got away" 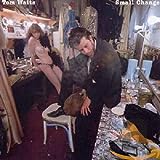 TOM WAITS videos - The One That Got Away

Home > W > TOM WAITS > The One That Got Away lyrics