TOO $HORT (TOO SHORT)
"Mack Attack"

I'm not a wannabe pimp, I never simp
Since I started walking I had this limp
It was a cool type walk, just like me
The Too S-H-O-R-T
I might be young, but I spit this game
I start it with P, and it ends the same
If your brain is lame, remember the name
When it's Too $hort baby, ain't nothing plain
Dangerous Music on the microphone
Makes you wanna break your hip bone
Might break your leg, or maybe your back
Grooving to hard to my mack attack
It's really not easy, you know it's hard
Sort of just like my gangster car
You know what I mean, Vern? It's like funny
I mack legit and make all the money
See my capital T on my diamond ring
We hook up the beat and love to swing
So while you're out there grooving back and forth
I want you to scream out "Sir Too $hort" (Sir Too $hort!)
Don't stop that rap (Don't stop that rap!)
And it's just like that
Get buy girls, while I rap
I make big money, that ain't no crap
When I grab that mic, and spit my rhymes
I gotta have an 8 or 909 BEAT
So I can rock you all night long, SHE'S
On my tip, she love my song, HE
Tried to do it but did it wrong, FREAKS
Want to get my all alone, but I'm macking

I finally got a chance to grab my pen
And make another rhyme so I can make more ends
It's a rush production, not the beat
I rushed it out the studio and hit the street
Now I'm rocking one more time
Young girls love my Too $hort rhyme
But that big fat girl better let that go
Before I point right at her say "Ho!"
I'm riding drop-top Caddy, I don't dip fake
I step on the gas then I hit the break
Do it again as I catch the beat
You're feeling that bass all down the street
Jumped out the car on 9-0
I was wearing all white Capezio
Had my 501's, five dunkey ropes
Couldn't be saved by John the Pope
The M, A, C and K, from Oakland, California
I'm Too $hort baby, no I don't play, I'm macking

Freak nasty, I like your dance
You know it looks good in those pants
So damn good, I had to glance
Now I'm macking
See this gold? I bought it all
Now every night you young freaks call
You see my car? It's my best friend
So it you touch, you'll meet your end
Time will tell, just keep it cool
Don't play that game, don't be no fool
I'll burn rubber all down your block
You know what I want so keep the door unlocked
I'm coming in baby, don't waste no time
It's a mack attack, and now you're mine
Dangerous Music is what it seems
The reason this floor just met those jeans
I was running the game all in your ear
You're talking bout love to a stone cold player
Girl look good and wanna have that sex
Took another look and wanted to break that neck
It's a mack attack, coming from way back
My name is Too $hort baby, I don't play that jack
I'm from the Dangerous Crew, and I know it's true
The only thing you'll say about Playboy Too
Is I'm macking 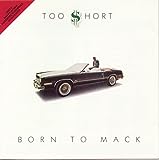