He bears a ton of gruesome cargo, can't seem to equate
What is fact or fiction
Gonna blow the escape hatch
From the miserable existance - find the Eden in his brain 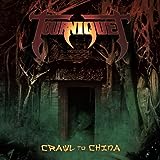