Now I have a friend, I might have a few
Sometimes I think they just don't care
But I think sometimes they think the same thing of me, yeah
You might say we've got a problem there 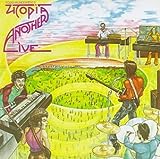