Earthbound to Johnny boy just picked up your message
'Bout those Balinese ikats you thought I might buy
Now your voice on my machine is more alive than what you are
Since your daredevil hang glider fell out of the sky
Now Armand's looked all over but he can't find your car keys
Were they under the tire? Were they under the seat?
Because as it stands now your beloved white Aires
Is fair game for the vandals up on Makapuu Street
And your grandmother's number, we know it's here somewhere
But Suze can't seem to find it, now she's losing control
And so what about her, and little Eldon and Layla
And that hypothetical spectre, your gilt-edged soul
Which defied many perils, in the face of all reason
And in so many settings and for all your young years
Insisting on pure freedom for its too-short season
Riding high on its ration of enchantment and fear
Over the hill and into the next meadow and on and on and on

In a near random universe there are still certain combinations
Picked out from all other possible ones
Which, when given some time and the just-right circumstances
Not too far from the earth or too close to the sun
They will dance and they'll spin in the embrace of the trade winds
Playing havoc with the hearts and the upturned faces down below
Until the laws of curved spacetime, susponed without warning
Kick back in with a vengeance for the last act of the show
Going too far too fast in that final wing over
As your glider comes tumbling out of the clouds
And you clutch at your chest but the chute never opens
And they find you there tangled in that white nylon shroud
When we get Grandma's number I think I'll just say to her
Your Johnny's home for Christmas, it was a hell of a ride
And I know that some day you'll be showing me those blankets
All covered in glory on the hereafter side, saying
There was never any question, it was always all or nothing
Surf and/or die 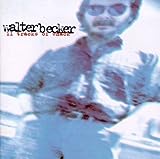