Every blue note that rolled off his tongue
You could feel his soul twisting right in two
Nobody knew where he came from
Ah but everybody knew, everybody knew

She whispered in his ear, and he heard the thunder
Singing 'bout a world he never knew
Head spinning round, he began to wonder
Was he made to love her, or born to sing the blues

And sometimes at night he longs for her whisper
But he hides from the dawn, 'cause he always wakes to find her gone

In some broken down dressing room in some major city
The thunder plays an old familiar tune
He spies a face of a distant angel
Outside, beneath the halo moon

Finger on the trigger, needle in the vein
One more bullet, it might be your last ride
This is ain't no no-show, this ain't no nervous breakdown
And it sure as hell ain't the time to let the fool decide 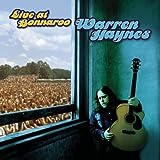