He's been roundin' off bolts since the age of fourteen
Was that a five eighths or a nine sixteenths?
He's got a metric socket that don't quite fit
Well it'll wiggle just a little but it ain't quite stripped
The safety guard's gone from his grinding machine
He got a stiff paint brush he only kinda got clean
He's the hired man, my neighbor and a cousin in law
He's a jerry riggin' fool, he got the tool for the job

Well it's vise grips for pliers, and pliers for a wrench
A wrench for a hammer, hammers everything else
It just don't seem to make much difference
I sure do like him but he's hard on equipment
I sure like you son, but you're hard on equipment

He's got busted up knuckles, his thumb got bruised
Jesus Christ was a carpenter, too 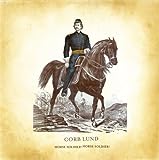 CORB LUND videos - Hard On Equipment (Tool For The Job)