DEVIN TOWNSEND PROJECT
"Through The Wormhole"

Ziltoid: Blattaria!... War Promcess... I am here with my new best friends:
The human beings, who are now my army. And together, we shall defeat you!
... Captain Spectacular?

Ziltoid: Yesss... please, provide me with the weapon

Captain Spectacular: Whaaaat[?] b b b... but Ziltoid!

Ziltoid: I have duped the humans into
Thinking I am their side

Captain Spectacular: Ziltoid we had a deal... you signed a contract!

Ziltoid: Yesss... I signed it in pencil, with my left hand...
I mean you're just so dumb it hurts!

Captain Spectacular: Ziltoid, how could you do this[?]

Ziltoid: Oh please... do you actually think there anything
In common between me and you hyman?

Captain Spectacular: There's more you have
In common with humans than you realize...
Think back to your childhood, you must know who I know!

Ziltoid: What are you blathering about?

Captain Spectacular: Ziltoid, search you memories...
Don't I look familiar to you?

Captain Spectacular: We have the same mother!

Turns out... captain spectacular is Ziltoids half brother!

Blattaria: Will you losers get on with it? What are you talking about over there?

Captain Spectacular: I have something here from you mother...
And she wanted you to have it... THIS IS UNIVERSES ULTIMATE COFFEE BEAN!

Captain Spectacular: Ziltoid, you were always destined to be
Humanities last hope! Now END THIS!

Ziltoid: Wow this is so heavy... (and unbelievably cheesy...)
Oh well: PLANET SMASHER... I COMMAND THE ATTACK

Ziltoid: Whoa! What the heck?!?

Blattaria: Ziltoid, I see you have a soft spot, well...
Let me show you how we play in my world...
Captain Spectacular YOU DIE!

All seemed to be lost. What Ziltoid failed to realize is,
The Planet Smasher needed his own reasons to summon his
Ungodly power. The pain of his brother dying pierces his withered hearth.
As Ziltoid kneels beside his fallen brother, as if in a dream,
The song they'd sing together as children is all of a sudden on his lips.

Ziltoid: memories... all alone with the...

The War Princess wasn't about to go quietly... she grabbed out,
Got ahold of Ziltoid and in that moment, they were both GONE!
Turns out the thing the planet smasher hated the most... was musicals!
Who saw that coming?!?

So Ziltoid, the War Princess and the Poozers
Are jettisonedthrough that hairy wormhole
The Planet smasher?
Off to wherever Planet Smashers go... the musicals worked!
The humans now left alone amongst themselves
To celebrate, wallowing in the sacrifice of Captain Spectacular,
Yet giddy in the joy of their survival.
Awash with the promise of their brand new world.
Voices raised together in celebratory blissful song,
The earth sang as one. Believe it or not. 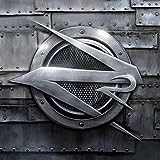