As I step to the mic with the b-boy stance,
To the braveheart m.c.'s I wouldn't take a chance,
Keep quiet while the m.c. rap
And if you disrespect me, it's the big payback
The E Double E is my name, I spell,
Thanks to the clientel my squad rocks well,
I'm in your hood, comin' through like mud
Chromed out, beamed out, in a all black truck
You a player, what team you wit?
I got major chips, I push the flyest whips
Got the flyest chics, my outfits be freshly dipped
No matter what the steez, I'm equipped

Well my name is M.D., I'm known as the motivator,
Funky beat maker, new jack terminator,
Enjoy to destroy, because your rhyme's a toy
Never sweatin no click - why p? - 'cause I'm a b-boy
When we on the scene, we always rock the spot,
The green-eyed bandit, scratching mic doc,
In the beginning, we had to let the world know
Now, EPMD is clockin all the dough,
Sit back and relax of course the biz phat,
TV wit the phone in the back
Always calm under pressure, no need to act ill
Listen when I tell you boy, you gots to chill

I be the fly rhyme maker, female heart-breaker, the dude
Want to play me and my crew, that's rude,
I'm dope when I get down to the beat,
I'm raw, I keep it hardcore for the streets
My track's a miracle drug for thugs in this club
(P) Yo e, I remember when they used to be scrubs, what up?
I'm the big bear, some of y'all are baby cubs,
Talkin' large money when I see your bank stubs,
I take control of your body and soul
Pack heat in my pants when it's time to roll

Well it's P-Double E-M-D-e-e,
Here to bless the track or flip the flow wit E
When we touch the microphone, no doubt, we always shine
Jewels and rhymes, settin traps and land mines,
Did thousand shows faced many places,
EPMD is back, and yo, throw the tape in
'Cause when we come around, we always come wit the flavor
Underground hardcore funk, than what we gave you
Or give you, ayyio what's next on the menu,
Business to take 2's Stadium and venues,
Wit E, and I'm the microphone doctor
And the capital E, capital P,
Capital M, D, it's no doubt, the world shocker
Hit squad, def squad, yeah we both get ill,
So believe me when I tell You boy, you gots to chill

Yo, I'm in the house now,
Dudes wit ice grills, raise they eyebrow, amazed like wow,
E and P return like D, last dragon
To show m.c. just what's happening,
I gets busy and that's an natural fact,
I'm like Zorro: I mark and E on your back,
Worse than that, I clown those wannabe gangstas
Say somethin' to them and run right through them

I'm makin' crazy g's, politicin on my mobile phone,
D E double about the microphone,
'Cause we're the funky rhyme maker, puffing? gon shit? faders,
The one who rocks the fisherman hat
I grab the mic and make the crowd react,
We keep the money stackin, fingers snappin, toes tappin,
And when it's time to roll, uzi patrol still packin,
EPMD, the mic's are only friend,
Took a break for a while and now we back again,
So if you think about gamblin, you better come prepared
EPMD is takin' all the shares, you gots to chill 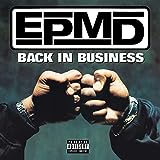