EVERY TIME I DIE
"Ebolarama"
(Keith Buckley / Every Time I Die)

Boys, shoot to thrill, from the hip
This time we put the "act" in action
We've tricked the pigs into thinking
That this auction is a pageant

Squeal like soft music
If it helps, we'll dim the lights on the floor
Neon bulbs are the cosmetics of swine
Everybody looks quite dazzling
Trussed up in their formal attire
You'd make a great secret if I could keep you
But we all spill our guts

Turn the lights off on us
Like a moth left in the cold
In the dark, begging for more

When the urgency strikes you
You'd better not lose your nerve
It's the rush that the cockroaches get
At the end of the world
It's alright, it's alright
There's a pail by the bed if you need one
(But you're doing just fine)
When in Rome we shall do as the Romans
When in Hell we do shots at the bar

This is a rock and roll takeover
Living each day one night at a time
There were mercy fucks, there was blood
Oh, you should have been there by my side
This is passion
This is red handed denial
I have no lover
And she hasn't the prettiest eyes 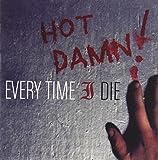 EVERY TIME I DIE videos - Ebolarama