JOHN PRINE
"That's The Way That The World Goes 'Round"

I know a guy that's got a lot to lose.
He's a pretty nice fellow but he's kind of confused.
He's got muscles in his head that ain't never been used.
Thinks he own half of this town.

Starts drinking heavy, gets a big red nose.
Beats his old lady with a rubber hose,
Then he takes her out to dinner and buys her new clothes.
That's the way that the world goes 'round.

I was sitting in the bathtub counting my toes,
When the radiator broke, water all froze.
I got stuck in the ice without my clothes,
Naked as the eyes of a clown.
I was crying ice cubes hoping I'd croak,
When the sun come through the window, the ice all broke.
I stood up and laughed thought it was a joke
That's the way that the world goes 'round. 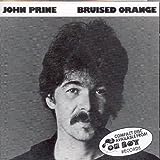 JOHN PRINE videos - That's The Way That The World Goes 'Round