JONI MITCHELL
"In France They Kiss On Main Street"

Downtown
My darling dimestore thief
In the War of Independence
Rock 'n Roll rang sweet as victory
Under neon signs
A girl was in bloom
And a woman was fading
In a suburban room
I said, "Take me to the dance"
"Do you want to dance?"
"I love to dance"
And I told him, "They don't take chances
They seem so removed from romance"
"They've been broken in churches and schools
And molded to middle class circumstance"
And we were rolling, rolling, rock n' rolling

Downtown
The dance halls and cafes
Feel so wild you could break somebody's heart
Just doing the latest dance craze
Gail and Louise
In those push-up brassieres
Tight dresses and rhinestone rings
Drinking up the band's beers
Young love was kissing under bridges
Kissing in cars, kissing in cafes
And we were walking down Main Street
Kisses like bright flags hung on holidays
"In France they kiss on Main Street"
"Amour, mama, not cheap display"
And we were rolling, rolling, rock n' rolling

Downtown
In the pinball arcade
With his head full of pool hall pitches
And songs from the hit parade
He'd be singing "Bye, Bye, Love"
While he's racking up his free play
Let those rock 'n roll choir boys
Come and carry us away
Sometimes Chickie had the car
Or Ron had a car
Or Lead Foot Melvin with his hot-wire head
We'd all go looking for a party
Looking to raise Jesus up from the dead
And I'd be kissing in the back seat
Thrilling to the Brando-like things that he said
And we'd be rolling, rolling, rock n' rolling 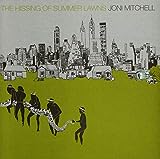 JONI MITCHELL videos - In France They Kiss On Main Street