I was getting high in the van in St. Catharines
While you were rubbing elbows in the art scene
And back in the city, I was on a tear
High-fiving every shithead on Queen Street
Passed out on the bus ride
I got home in the morning at a quarter to ten
Everybody was sleeping in
Mom and Dad were smoking weed in the attic again

[Chorus:]
I said, "I don't know what you want me to say"
Stood by watching as your world went up in flames
When you've tried everything, but the feeling stays the same
You had it all, you pissed it away

[Bridge:]
I don't know what you want me to say
'Cause back in the city, I was on a tear
You had it all, you pissed it away
Back in the city without a care

[Outro:]
I still dream about you time and time again
While I've been sleeping in somebody else's bed
And as my body aged, the feeling, it never did 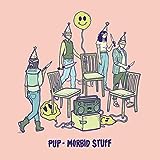