Arthur's court, he bade him come
Galahad his bastard son
Battles soon for him to fight
Blessed his youthful son a knight

Arthur and the knights' marvellous stone
Floating upon the river alone
Pointing from the rock, the sword shining bright
Glittering jewels, shimmering light

Gawain first he tried to draw from the stone
To wear by his side
Each knight took his turn, brave to the last
Faced with the sword remaining fast 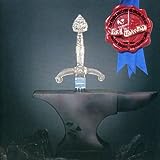