Unconcievable, unbelievable
Grammar like a hammer information recieveable
Sent by the lord, here and abroad
With words that were thought they could retort
For force because that makes Run the boss
So get lost, becuase I just tossed the poss
Make way today, and if I may, I say
I make pay with Jay, so get away OK?
Gaining weight, I ate the whole plate to date
Never make the break, I don't state the stake
Just keep the keep, don't sleep for weeks
Get peeps to leap, and I'll bleep the jeep
Put down the clown, get 'round the town
I've bound the sound, and I've found the crown
Get paid and laid, not jade afraid
'Cause I stayed and made, not a man to fade
Gotta group the troop, gotta shoot to shoot
Shoot hoop to scoop, or a scoop to loop
Going off and on, not soft to con
Just black and back to go back and run
Go to school and cool, not drool or pool
Gotta soul and goal and cold and old jewel
Upset the best, I met, met a jest
Just lest the pest, and I am the best
Gotta punch the crunch, cold munch the munch
Not Grady or the lady from the Brady Bunch
Got Gs and Lees, like Ds and Ts
Charge Bs for freeze, or Ds with ease
No dope to cope, just good to go
There's hope the Pope, big nope for nope
Quite clever and ever, but together forever
Run-DMC, and we're tougher than leather

Strong and mighty, hard as can be
Perception of the life were as strong as D
Every Friday I'm writing, write for what's right
It's even deeper in the night, I'm keepin with my mic
I gotta go for broke, and I ain't no joke
I'm gonna yoke the choke, 'cause of the suckers I smoke
Rush and crush, leave 'em in the dust
Bust the bust, those scum who mess with us
Only strong survive, and the weak will die
As long as I'm alive, I'll keep my head up high
'Cause we're strong in body, and smart in mind
I was born to bind, as the gift to mankind
I pump with jump, never givin no slack
I be killin' the villain, and I chillin' (you're black)
I'm not a bum, I'm not dumb, it's me you work from
I'm the king to my beat 'til my kingdom come

'Cause I'm rough and tough, call huff and puff
Don't bluff the stuff, got enough to muff
Don't long it on, go long on song
Go on and on, just the best be done
Put preach and teach, with a speech to reach
All streets in each, with beats for treats
Got the king supreme, may seem the gleam
With a beam the ream, no screen was seen
Not a gang to bang, or to hang with slang
Talkin angers ang, about everything
Just brothers and others, like fathers and mothers
Who discovered the lovers that think they're up and above us
No crime or time, just rhyme and lines
For roaming on no phone in time
Just cut the stuff, do you get enough?
'Cause we're rougher than tougher and rougher-tougher than tough

With a voice like thunder, words of wonder
All alone standing tall, and suckers roll under
Possessed with power, cowards will cower
Dogs we devour, hour after hour after hour
Three men riot, you can't deny it
Will so ill, that you can't defy it
Gonna live, positive, forever and ever
Run-DMC, and we're tougher than leather 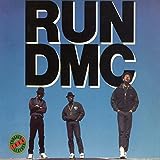