[Eminem - speaking over Hook 1]
It was like.. whoahh and then the fuckin room started spinnin and shit
And my friend came in he was like, "Yo! Yo! Em! Em!
You puttin that shit up your nose again?"
And I was like, "Naw" nuttin like - everything was just spinnin
I couldn't even see and like, he started to look like a monster and shit
Then I just started laughin and threw up all over the fuckin floor
It's crazy

[Eminem]
My music is therapeutic for whoever's there to use it
It's like, Lucifer's here to influence listeners through it
You probably do what it said to do just from listenin to it
It's got the power to get you to do it (c'mon)
So when the shit comes on, I wanna see some shit jump off
Some bitch get slapped, some motherfuckin kid get stomped
So get this song, go run out and buy this disc
And try this shit, as much coke as I just did
'Cause times like these, got me doin lines like these
Plus I grab a pencil every time that I light weed
It's probably because of the drugs Shady does what he does
And is what he is, I'm dizzy, Bizzy, visit these kids

[Bizarre]
Hey Stephanie (hi!) Let's take some ecstasy (okay!)
Now pull your pants down bitch and have sex with this dog next to me
(Huh?) 'Til I'm dead I'm takin blunts to the head
Needles in my broken leg, listen to Grateful Dead
These mescalines got me sure
That I can fuck any whore with genital warts on the Warped Tour
Who slipped this downer in my Snapple?
Cussin out Interscope (Bizarre, you're signed to Capitol!)
Fuck it, I was born with half a brain
Sniffin 'caine, at celebrity basketball games
You motherfuckers think I'm a gimmick
'Cause I got a Cash Money tattoo and roll with No Limit (UNNNNGGGHHH!)
The last time I sniffed blow
I ended up in Denver, Colorado at an Iggy Pop show
Bizarre be smokin a half a pound
Fuckin the engineer's wife, while he's mixin my song down

[Eminem - speaking over Hook 1]
It's like, back when I first went on tour
I like, went crazy I was like out of control
And - just was fuckin wasted every night, like
Wakin up the next morning like - where the..
Where the fuck am I at, what the fuck is goin on
You see what I'm sayin? I was just like, out of control

[Swifty McVay]
These Benadryls got me stiffer than a mannequin
Eight years old swallowin Anacins, standin over my bannister
Laughin with a chromed out caliber (hahahahaha)
The weed that I'm sellin is black look like the back of a tarantula
I keep a substantial amount of aspirins in my Acura
Smashin' it, after framin' a nigga with smack and dust
I'm scandalous, drugs been ran for months
Crackin' capsules to expand our blunts
I rolled it up and take the pressure to the head
Now I'm lookin' like a extra on "Night of the Living Dead"
Until they find me on a stretcher
I'm quick to sample anything, bitch you got a tester?
This crank'll have me blowin' up banks like Uncle Fester

[Proof]
Ahhhh.. watch tonight, you'll admit that I'm a fiend
Pop beans, 'scalines, along with amphetamines
Ghetto kings, meddling with the smell of greens
Got a Jell-o spleen, and see yellow rings (ohhhhhh)
Blue pills, and purple mushrooms
(Hey little girl, you got a curfew, don't you?)
Missin since yesterday, perfect just for rape
See I'm on Judgment Day, numb from Special K
Two tabs of X and vitamin C
Swallow Hennessey along with Tylenol 3
Grindin the teeth at the signs of the E
I lost six days at a time in the week
The crime in the street hold your parents for ransom
While D-12 gang rape Marilyn Manson
In twelve hours we blow a pound of the chronic
Barf up my stomach linin, drown in my vomit

[Eminem - speaking over Hook 1]
'Cause I like, I always tell people - yknowhatI'msayin like
If you got an addiction, don't admit, to nobody, yknowhatI'msayin?
Keep that shit to yourself, because if anybody sees that, yknahmsayin
When you're out in the public eye and shit
They're always gonna think that you're on that shit even if you're not
That's why I always tell my friends, knowhatI'msayin but
I mean, like for me, I don't give a fuck
I'll probably end up, dyin from this shit one day
Probably pick up a newspaper in the morning and it's like
"Eminem dies from, drug overdose" - youknowhatI'msayin? And
And my friends, they ain't no fuckin better, yknowhatI'msayin?
They ain't nothin but influences, bad influences to me, y'know
It's peer pressure, shit is like all peer pressure
That's what it boils down to - and, I give in to it
So do they.. 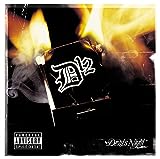