Used to go out driving, sometimes late into the night
Twenty-one, fucking round and wasting gas
Across the bridge to Sheffield
Then out into Tuscumbia
Where the main street's a time-trip to the past
Behind the Hotel Grant, there was a flaming dumpster
I saw a group of Klansmen in their robes
I circle back, but they had vanished like rats
Leaving nothing behind them but some smoke

So, if you'd like to tell your story
By all means, go tell your story
But don't forget that you only have one side
So parlay your Innervisions with the usual suspicions
As you make your grand approach to the divide
And when you're changing lanes and passing on the right
Check your blind spot and signal your intent
I saw that Honda full of girls go airborne into the trees
In the pouring rain on interstate ten

Used to go out driving, sometimes late into the night
Trying to make sense of the pieces of my life
Still young enough to not know how the puzzle fits together
"Nothing to fall back on but a knife"
The bombed-out looking factories on the east side of town
Blasting "Here Comes a Regular " on ten
An epiphany, a moment of clarity
Driving all alone at four AM

In a van full of stink, we set out upon the plains
To the Black Hills and Rockies and Cascades
We had never been out west, at least not further out than Texas
As our lives spread out before us like a page
An unwritten novel, our Huck Finn adventure
Come to life, we were living in real-time
That rare day when we just turned the music off
And let the wide-open vistas fill our minds

We were already older, yet much younger than today
Pushing hard against the limits we'd arise
Ever westward, we saw sunglass reflections
Of a setting sun in vast Montana skies

And there's this alternate reality where everything was different
Than the world of happy endings we endure
A moments distraction, an alarm clock powered down
A blind spot not checked before a turn
That Grand Prix we saw head-on on our way to see Replacements
When I hydroplaned but caught the road in time
That guy on I-10 driving east as we were west-bound
In Flordia, two-thousand, April-nine
That ten-degree decline headed down Teton Pass
Cooley driving, snow on solid ice
That meteor that fell beside our bus at Idaho
As we drove on past a near flaming demise 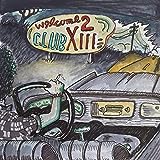