[Inspectah Deck]
This is the greatest story never told
The life and times, seventh episode
Based on a dad that I've never known
Mama raised me to hold my own, but I went against the grain
The tracks of a tear, show's the pain
Trapped in cage with the shackles and chains, I lost my grip
Try to handle the game, through the fire, didn't happen to change
You can try and kick it with him, I ain't listen, I was trapped in my way
Young and dumb, buzzing off that 151 Proof
Backshotting shorty on the project roof
Wow, look at him now, came a long ways from the hallways
Coppin' on four, 4 and Broadway
I was 16, working the triple beam
Catch a vick, jack a whip, anything getting this CREAM
The fiends had him falling in love, and the fiend became me
I needed more than drugs

[Hook: Pleasant]
If you look in my eyes, you see what I see
Take a look at my life, you see why I'm me
Everyday on the grind, I"m fiending my seed
Try to seek out at dying, that's where you'll find me

[Inspectah Deck]
I heard the homey say, this can't be life, this can't be us
He can't be right, or maybe it's true, or maybe it's you
I say it's the devil and all the things that he persuade me to do
I'm holding back just for making the news, chasing haze with the booze
Doing the tango while they playing the blues
Loose cannon, attracted to the neon
Little RC stepping up with his G on, he on
I learned from the corner dons, the cops, the cons
The sugar daddies, the tricks, the johns
I was quick to get involved, addicted to it all
Got MY GED behind the prison walls
I risked death just to rep where I'm from
I got slapped in the head with the gun
Second to none, perfection with my kids it become
Cynthia's son, forgive me for the sins that I've done

[Inspectah Deck]
Sleepless nights, vampire fiesting on the darkness
How could I see the light?
Grown-ups try to lead them right
Still catching felonies, they telling me, everything gon' be alright
I'm like, I ain't try to play the fool, I just want a plate of food
Pay my dues, hustling to make to make it through
I'm same as you, but I'm considered lucky
'Cuz my buddy's in the grave should of made it too
The stress and the pain, my lifestyle destined to change
Lord bless him for the rest of his days
May he be everything that he say, give him strength to be a leader
Or to lead him astray, the sheep or the pray
Mama used to say believe in this day
Situations force people to change, I"m so deep in the game
I will never be the same
The devil be the blame, that's the reason I sing 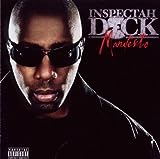