[Inspectah Deck]
It had to be this way
This is for real
Nobody said it would be easy
So let it be (ooh.. oh yeah)

Aiyyo, S.I.N.Y., Killa Bee hive
Eastside, duckin' the 5, roll wit' the live
Sweet Love, sweep me in the bug eye, we 'bout to glide
Head fried, spittin' the scribe, move in disguise
Wan' test I? Access denied
I live and die by the motto: let none survive
Livin' off my last cut, can't hold the sword up
You can have that for free before I take your best offer
Stalker, preparin' for your sayonara
Torture, test my waters I come like orca
Niggas need life supporters, for bein' so weak
I speak as a veteran and lace the heads I've creased
And leave my footprints wherever I've blessed my presence
I.N.S., livin' legend 'til the essence
Given with no prescription, this is the medicine
Settin' a new standard, they fail measurin' up to
They suck too, thorns in the hustle
Pawns in the struggle, darts fly like C.I.s beyond the jungle
Trouble Man can't dance the Hollywood Shuffle
Knees buckle when the Killa Bees come thru
All you heard was "1, 2", then the gun blew
Question is, "From who?", numb you
Like a 100 CC's of morphine, taken daily
Keep out of reach of your offsprings

[Hook: Shadii of The Force MD's]
Too hot to handle, too cold to hold
You pumpin' that substance, that's uncontrolled
[2x]

[Inspectah Deck]
Too cold to hold, substance uncontrolled
Five-O said, "Tell it to the judge"; I never told
Never fold, though some turn like fake gold
Young and old I lock down like parole holds
In the midst where the clips blow, I rip shows
Hit your zip code, my sick flow condones
Soon to spread like Ebola, the autopsy showed
The reports, another John Doe - overdoser
Overexposure, facin' the flame thrower
I hold ya hostage - code name's the Ayatollah
Mind controller, 2009 time quota
The high roller, sting like a king cobra
Blow the whistle on kids who unofficial
Pistol pops, ceremony deep within the gristle
Nickel and dime, rhymes sign of the times
My lifeline, bubble like a fine wine, dyin' for mines
The dopeman, deliver like the postman
Patrol man, saw the hand-to-hand, did I run?
They know I got the teens strung, plus the fiends come
In abundance, lined up, spendin' 100's
The substance provides, continuous high
I'll give you one free for every 5 sides you buy
Gettin' high off my own supply, low in the ride
With the low eye, daybreak and makin' dough rise

[Inspectah Deck]
My style's so underground, I write rhymes on fossils
Use as directed and wear protective goggles
Shaolin's the borough, rap Picasso
Blow like a hollow-point, foes sure to follow
Pop a bottle forever, can't stop tomorow
Chewin' all food for thought, hard to swallow
Cold like Chicago winds, taps on my convo
El Diablo cross the Verrazano
P.L.O. Style, released while the beasts raid
And those who can't stand the heat, they seek shade
The rapture was told of how one man tackled the globe
We go so deep, it rattles your soul
I see many have come, but few are chose for the role
In this ritual, rhymes walkin' on hot coals
Quick to spot those who pose as friends and foes
Wind up violated like I was the P-O

[Interlude: Shadii of The Force MD's]
Satisfaction or your money back
Gotta keep to makin' comebacks
It's the best that you ever had
Got you fiendin' on the next bag 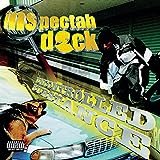