Whistle Man, Whistle Man, wasn't he brave?
A little crawdaddy tried to whoop this train
He was brave all right, brave as any man
But his judgement, Lord, wasn't worth a damn 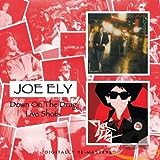