LOUDON WAINWRIGHT III
"What Are Families For?"

Your mother's loose, your father's slim
She smothers you, you bother him

Another bundle comes along
But by this time something's gone wrong

Awake all night deprived of sleep
It's overload they're in too deep then...

She forgets to take a pill
Overload is overkill
What... what are families for?

He's at the wheel, she's at his side
Three kids in back out for a ride

Kids can't sit still, "are we there yet?"
He lights his seventh cigarette

"Almost," she says, "it won't be long
Look out the window, sing a song"
Singing what... what are families for?

The first, the oldest and the best
Smarter, quicker than the rest

They do what you want them to
Because those two look up to you
What... what are families for?

Finally you leave the nest
Life was a quiz, now it's a test

You can't just live, a living's earned
So you use every trick you've learned

You cast off siblings, you make friends
Discover the receiving end

You swore you'd never be a dad
But that's what works, isn't that sad?

Young women want to mother you
You hate it but you want them to
What... what are families for?

All grown up, holding your own
You fend them off by telephone

You keep in touch, it's come to this
The furtive hug, suspicious kiss

Mom wants back all that Dad took
But Dad is dead, he's off the hook
What... what are families for? 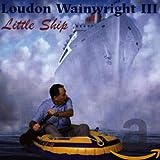 LOUDON WAINWRIGHT III videos - What Are Families For?