Up in the forest In the lonely hills
Stalking his kill
He looks over mankind
Waiting to strike at the perfect time
Mankind's gonna fail
The world is in his grasp
Heed the fucking wizard
This day may be your last
Waiting all this time
Planning his chance to rule
Heed the mountain wizard
He's coming after you! He's waited all these years
To cast the perfect spell
To rid this world of humans
And spend them straight to hell
He waves his staff at an unsuspecting city below
And the clouds above start to swirl as it lights a greenish glow
FIRST STRIKE: Earthquakes, lighting crashes, fire spreads
As he watches on with a smile as he counts the number dead
SECOND STRIKE: Buildings' falling across death and sickness is at hand
THIRD STRIKE: Ashes ruble all that's left, victims breathe their dying breath
FOURTH STRIKE: The spell has worked after all
The wizard standing proud and tall 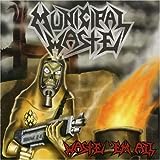