INSPECTAH DECK
"What They Want"

[Intro: Inspectah Deck]
Pop in peace..
Once again I gotta rise from the dead
Like the prophecy has been fulfilled or something
So be it..

[Inspectah Deck]
I know the code, I'm a capital G., still surviving lowkey
Brain shifting, pitching out of the V
Bottom line, you got a problem with me, my name pop in the P's
Fuck a watch, I got property deeds
I don't talk, won't spot me with D's
You can spot me at the spot, with the next top model from Queens
East side six rider, won't stop at the freeze
Where them, coppers'll squeeze and them boppers is G's
Where it's regular to serve the curb, when I splurge the word
Now break bread, break birds in thirds
Whose y'all I never heard y'all herbs, never burnt ya herb
I run circles, all you work y'all nerves
I'm a legend watch me work my swerve, on the verge to surge
You understand it, if you learn the words, it go

[Inspectah Deck]
This is that get low, blow your 'dro, sip ya hypno'
Three miles a hour, NARC style in ya whip slow
Big city glow, I rest where the semis blow
And sleep with a piece, the streets won't let me go
So, I'mma rep, til I'm dead, in my physical
No, I'm not Biggie Smalls, I ain't 'ready to die'
Or ready with the infrared, his head's ready for I
Live from the mosh pit, they black Jennifer's eye
It gets like that, when you grinding in the pits like that
The overtime, never quit type cat
Stay low, posting up like Shaq
Catch me stepping in the crisp, uniform like Max in white cap
I'm back, so true to myself, I shine black
Like that, then I get you more for nine flat
I-N-S, House Gang on the plate, I buy that, like
You cross me, and ah, nine's clap, and 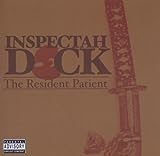 INSPECTAH DECK videos - What They Want

Related Artists
Home > I > INSPECTAH DECK > What They Want lyrics