There is no remorse

Sinewy limbs reach through the bars to collect the carcasses of souls
Given over the deeds of infamy, Skeezix took his toll

They call him by different names
Some call him Gilgamesh, the man who has never tasted death 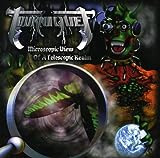