Things may look good for now
And you feel that things have tuned around
Did you think about the things they said?
Will you follow them until you're dead?
We may have called off our attack for now
But not foolish enough to let our guard down
Some things we never will forget
And that's why we'll always be a threat
We'll strike, we'll slay
Push them to the flames
This threat is not going away
Armageddon's calling because you sold your soul
And we'll be waiting patiently to take back what you stole
With preparations we watch each step
Retaliation! We'll never quit
Through persistence we'll resist
Until they're all marked off from the list
You fear it's presence
It never rests
Nothing can stop
The relentless threat
And we're prepared to get killed
Smash apart the thing you built
Bring them down with force
We're the soldiers in this war
Defend? You can try the best you can
But this threat is too far out of hand
We'll strike, we'll slay
Push them to the flames
Things may look better now
But this threat is not going away 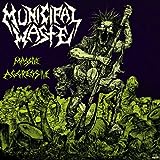