You thought that you'd have so much fun surfing with your bros
But in the water waits a terror that nobody knows
Without a fear you rip around, stoked on the killer waves
But to dine on your flesh's what this monster craves

Panic on the beach, there's nothing the lifeguard can do
The crimson red of your blood stains the ocean's blue
You never thought that you could be so low on the food chain
You're left a floating piece of meat in agonising pain

The meal is done, your body's gone, they only find an arm
A terrible reminder that you're never safe from harm
Back into the depths, its stomach full up from the deadly feast
Remorseless killer digests the deceased

When the water's not shallow you're bound to get swallowed
As the hunger for your flesh grows more by the hour
Was it a good idea to go for a swim
Since they'll never find your body in once piece again?

"Out in the water!"
The Terror Shark! 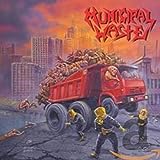