Gather around, let me tell you a tale
Of masters, of slaves and the graves where each of them fell
My desolate shrine you've made holy it seems
A haven for murder and torture and monstrous beings

Women and children, they're all the same
The cursed that's bestowed upon me is to blame
Ripping and tearing at throats with disdain
Onto their deathbeds they fell

Father confessor, kiss the ring on his hand
Oh how the holy revel in cursing the damned
When even the saintly have their perverted dreams
Which one's the devil, the priest, or this monstrous being?

A world full of kings, thieves and monstrous beings
Where robed men of God cast out spirits unclean
Lord of the unlight, I take flight through the sky
And you'll pray to a creature whose bleeding you dry 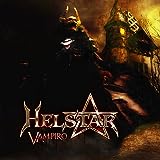 HELSTAR videos - To Their Death Beds They Fell

Home > H > HELSTAR > To Their Death Beds They Fell lyrics