Thank you, Mr. Hubble, for your telescope
We learned there's more than double now - the human rope
We have with which to hang ourselves, things are so much worse
And so much more that's out there - I'm talking universes

Thank you, Mr. Hubble, for your telescope
Why go to the trouble now and push the envelope?
We're just so insignificant - what's the hell's the point?
We're not handfuls but specks of dust in this gigantic joint

We used to think that Jupiter and Mars were pretty large
And though our little world was small, somehow we were in charge
The Milky Way's so minuscule despite what we pretend
That it's hardly worth looking at through your giant lenses

Thank you, Mr. Hubble, for your telescope
Hate to burst the bubble but God, there's not much hope
Or faith that such a thing exists - what's religion worth?
When in God's name what waste six days to make this puny Earth 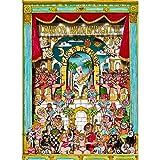