[Quasimoto]
Tomorrow never knows, usually tell it's too late
The day 3:16, when you meet your fate
The time of revelations is now, just look at the news
Shit happens everyday and the battle we lose
Look at the ozone layer, all the polluted waters
What kinda life we gonna have for our sons and daughters
Politicians, worse than the average bum
One brother bought a gun, started actin' dumb
We ain't got much longer if we keep up at this pace
Like common knowledge, guess some of us brothers learn late
I wonder if it's gonna end with earthquakes
Heart attack, cancer, AIDS, overturned lakes

[Madlib]
Tomorrow never knows what the future may bring
For the species that we call human being
Now that we all up in the new millennium
Scientists predict we gon' see plenty of
Destruction and chaos, big payoff
While suckas workin' and worry 'bout gettin' laid off
I'm tryin' to figure out how we're gonna survive
If a mass disaster attacks and it'll take all your lives
Leave the rest to suffer for not believin' the ways
I wonder if the world is gonna end with earthquakes and tidal waves
I wonder if the others will pass, suffered from havin slaves
Tomorrow never knows about them wicked ways but 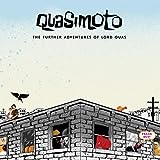